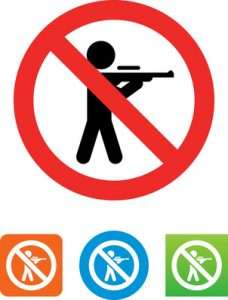 One thing you can say about Bumble, is they take dating safely seriously.

Bumble has been known for removing profile photos with hate messages and has a low tolerance for inappropriate behavior.

This week, Bumble announced on their blog, they’d be removing profile photos of singles holding knives or guns to the app, in response to the shootings in Parkland, Florida.

In an interview on CBS News, I spoke with KCBS reporter Rebecca Corral about this issue of whether guns should or should not appear in a dating profile.

Listen to the full interview here:

Rebecca:  One of the fastest growing dating apps is banning pictures of guns from user profiles. The founder of Bumble, a dating app where women have to message first, tells The New York Times that the move is in response to the recent string of mass shootings. The policy will mirror how Bumble handles nudity in photos and will only provide an exemption for users with military or law enforcement backgrounds who post pictures of themselves carrying firearms in uniform.

For more on the decision, we’re joined on the case KCBS Central Newsline by Julie Spira, a dating expert and founder of cyberdatingexpert.com Thanks very much for talking to us. What do you think?

Julie: I think it’s a great idea because people come to me, and one of the first questions they ask me is, “Julie, is online dating safe?” Bumble is taking the position that they want women to feel safer, we want everyone to feel safer.

If you see an image of somebody holding a deadly weapon, a knife or a firearm, you have the opportunity now to report that profile as suspicious, no differently than you would report their profile for hate speech.

Rebecca: On the other hand, if someone values their weapons so much that they want to take a picture of themselves posing with it, don’t you think somebody wants to know that about that guy?

Julie: That is one of the issues, because what happens is if somebody might want to swipe left on someone if they don’t agree with the gun issue.

Maybe someone will write it in their profile and happen to talk about it as one of their activities and what they like. If the photos are there, they’re going to get reported.

Members have an opportunity to actually go and dispute that. There is a little loophole, though. If someone connects their Instagram account with photos of pictures of them with guns, a user can still take a peek and know where they stand.

Rebecca: Okay. Now, I believe that Bumble was also talking about not letting people talk about their guns in their profiles, is that not the case?

Julie: Well, as of now, what I saw was the ability to report photos. If somebody is saying, “I love guns and it doesn’t bother me what happened in Parkland, Florida”, they are going to get reported.

Rebecca: Where do you draw the line then on what can’t be included in these profiles? Where do we start running into one, personal expression, and two, really revealing who you really, really are?

Julie: Well, the photos, of course– Bumble takes a position, and they take a position as the app with a feminist approach, because they want women to make that first move, but anything that makes somebody uncomfortable can be reported.

They have a crew of 5,000 people who are monitoring these profiles are going to take each and every one of them with a gun down.

Rebecca: Again, I want to push the point so you can give me the counterpoint to it. I want to know if somebody wants to take a picture of himself with a knife or a gun. If I were a user, I would want to know that.

Julie: I would want to know that too. Bumble believes users with guns do not belong in their safe, kind, loving environment, because they’re promoting love and safety and respect and kindness.

Perhaps Bumble isn’t the right site for someone who is a gun-happy person, but again, if you see pictures in somebody’s Instagram profile and they’re connected, they’re not going to delete that profile based upon an Instagram photo with a gun. If someone really wants to show that this is who they are, you can find out by looking at their Instagram account.

Rebecca: All right, Julie, thanks very much for talking to us, appreciate it. Julie Spira is a dating expert, she’s the founder of cyberdatingexpert.com.

Side note: Bumble graciously donated $100,000 to “March for Our Lives” and will not remove photos of those who are in law enforcement or the military.

Julie Spira is America’s Top Online Dating Expert and Digital Matchmaker. She’s the CEO and founder of Cyber-Dating Expert and has been coaching singles on finding love online for almost 25 years.