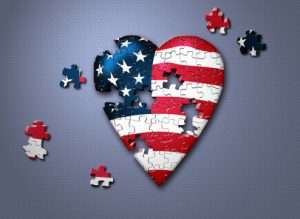 I have a confession.

I’ve been hiding a secret and can no longer remain silent.

As a dating coach in the business of love, I saw first-hand the strain on people’s relationships — including mine — when Donald Trump ran for and eventually became president.

During the campaign, my long-term boyfriend and I were on opposite ends of the political spectrum. He was on the right, and I was on the left. Initially, this didn’t alarm me, but over time, the division began to tear us apart, putting our relationship to the test.

I now fear, in this current political climate, that President Trump has destroyed romance as it once existed.

Once upon a time — two decades ago — we lived the fairy tale.

We fell in love at first sight, and after several joyful years together, we went separate ways. I wanted marriage, and he wasn’t ready.

Eventually, we wed others and lost touch.

Then in 2015, both divorced, we found our way back through Facebook Chat, proving a love so strong could never die.

We began sending each other digital versions of photographs neither of us had tossed away. His albums had been stored in an attic, while mine collected dust in a garage.

“We should meet up for a long drink and catch up,” his message said one morning.

I thought about it and both hesitantly and nervously, I agreed.

The moment our familiar eyes locked, we instantly realized the spark was still there.

I was the woman he wasn’t allowed to speak of during his marriage, he explained. He was the one I often regretted letting go.

When his curated mix of love songs arrived in the mail, two hearts resealed, and we resumed our romantic journey toward a second chance at love.

“We have the greatest story,” he proudly announced to my girlfriends when we reunited. I felt the same.

Blissfully, we started merging our lives with music as our backdrop.

He accompanied me to the Walt Disney Concert Hall to watch Gustavo Dudamel conduct the Los Angeles Philharmonic. Looking handsome, he wore an Italian sports jacket, and his sparkling hazel eyes matched mine identically.

I went to the Stagecoach Country Music Festival with him, wearing my Stetson cowboy hat as we walked through miles of dust and hay.

We posted photos online of us looking deliriously happy.

After a decade and a half apart, we were, admittedly, different people with dissimilar lifestyles.

I was more of an urban girl who lived in Los Angeles and frequented the liberal desert city of Palm Springs. He lived in a post-divorce rental home one hour north of me in Ventura County and thrived in the ultra-conservative mountains of Northern Idaho.

“It’s just geography,” I thought, and as a couple, we seemed to co-exist in each other’s favorite places with ease.

“I’m sorry I never proposed to you back then,” he said one evening.

My heart instantly started to race. Was my boyfriend about to get down on one knee with a ring?

After a moment of silence, I secretly hoped we still had time.

Although he had a history of commitment issues, our renewed love was growing stronger every day. That was until the heated election season rolled in when our perfect relationship started to fray.

“I can’t take another four years of the Clintons,” he murmured while pouring himself a martini.

“Don’t tell me you’d vote for Trump,” I yelled, then lost my appetite.

Once a registered Democrat, during our time apart, my boyfriend shifted his support to the Republican Party. He also hated the fact that Hillary Clinton was running for president.

Throughout the campaign, people were taking sides, and the effects began to permeate the bedroom. Couples were splitting up in “you’re fired” style — basically, instantly and without warning.

The great political divide was crushing relationships, including ours.

In a time of angry accusations of “fake news,” I started feeling like I was living in an all-too-real, fake relationship.

I was in deep conflict, believing we were the poster couple for eternal love. I didn’t want our story to end, so I buttoned my lips when he brought up his anti-liberal rants, and rolled my eyes when he praised “The Donald.”

“Turn off the TV,” he insisted, as I watched the Democratic debates during our trip to the Florida Keys.

“Really? I asked. “I can’t watch one of my favorite talk shows?”

Instead, we settled on watching romantic comedies on demand, curled up together, as a form of truce.

When political coverage became a 24-hour reality show, I noticed his attitude and values contrasted sharply from mine. I believe in gun control and Obamacare, and he’s proud of his gun closet and supports the “big, beautiful wall.”

I thought we could just agree to disagree as my parents did, but it was clear our bipartisan relationship was in jeopardy.

For a woman with a big and public voice, I remained unusually quiet, with the hope that he’d calm down after the voting frenzy was over. Slowly, I started to pull away from him, and I felt him doing the same.

One month before Election Day, we officially became a long-distance couple. He moved to Las Vegas, and I stayed in Los Angeles. With 300 miles between us, and Trump looking over my shoulder, it was challenging to stay connected.

I visited him to see the Rolling Stones in concert. He came my way for Stevie Nicks.

Then Donald Trump surprised us both by winning the election.

Shortly after, with tensions still high, he escorted me to a Hollywood party where both of us arrived dressed in purple to represent unity during a combative time.

On Inauguration Day, my boyfriend couldn’t take his eyes off the television, and I couldn’t bear to watch. He was as excited with Trump’s swearing-in as he’d be if he scored an eagle on his favorite golf course.

Then I asked myself, “Could we survive Trump?”

Here I was, with a man who believed our country’s new leader was making America great again. Meanwhile, I checked Trump’s daily tweets, now the primary source of hard news, as my blood pressure rose.

It was clear my guy didn’t want a left-leaning girlfriend, and I couldn’t express my feelings freely.

Still, on Valentine’s Day, a few weeks later, my beloved curated the perfect 48-hour love fest, and the cloud of politics never made it to the bedroom.

He drove over four hours bringing me one dozen long-stemmed roses in a ruby-red vase, embellished with a crystal heart bracelet. We later dined at an ocean-view table at Shutters on the Beach hotel in Santa Monica, where two years earlier we had reunited.

Together, we posted photos of us on social media and still felt in love as we toasted, “to us.”

It was our last night together as a couple.

Since he’d moved out of state, I tried to convince myself distance caused the split, but it was differing politics and the associated party values that slowly killed us.

Our president became his new hero, and he mirrored the commander-in-chief’s beliefs and behavior. He wanted a polyamorous relationship, and I wanted a devoted partner. It crushed us, but much to my surprise, I wasn’t devastated.

During the time that our country became so polarized, we had changed. My emotions went from sad to mad, but eventually, I started to feel empowered, and my voice re-emerged.

After our romance ended, I decided it was time to look for someone on my side. Luckily, I quickly met a political junkie who lives in town online on Match. He listed himself as liberal in his dating profile, which was enough for me to click the reply button.

Our first date was at a harbor-view restaurant in the Marina. A good sport, he drove over an hour in heavy traffic from downtown LA, looking distinguished in a business suit and tie. I felt immediately at ease.

“Did you vote for Trump?” he asked.

“No,” I quickly replied, as we both sighed with relief.

It was a deal breaker for us both, and as we talked about our nation’s challenges, we clicked.

I admired my brilliant date for helping Dreamers, along with his belief in stronger gun control laws. We talked about Obamacare, tax reform, net neutrality, and immigration issues plaguing sanctuary cities.

Call me a sapiosexual, but his intellect was an aphrodisiac, and our conversations lasted for hours. The floodgates opened, and in time, so did my heart. Who knew that shared leanings and Saturday Night Live monologues could top a mutual desire for dark chocolate?

Because we were in sync, we advanced to a second date, then to a third, and by now, we’ve lost count.

Talking about politics in Trump’s America is important to me.

I worry about our country, but I don’t regret reuniting with my former beau. While I realize our deep history and unconditional love had brought us back together, it’s a huge relief not to have that burning question of “what if” circling inside my head.

However, love is conditional, with politics now residing atop the dating totem pole. As disappointed as I am with our president, I have him to thank for this realization.

And I learned a valuable lesson when my love life got “trumped.”

I’m now watching Bill Maher’s monologues in the arms of a man who appreciates my strong voice, and I am forever grateful to be heard.

RELATED: Dating in a Trump World – One Year Later

Julie Spira is America’s Top Online Dating Expert and Digital Matchmaker. She’s a bestselling author and the the CEO of Cyber-Dating Expert. As an early adopter of Internet dating, Julie’s been coaching singles on finding love online for almost 25 years.