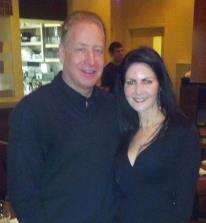 After finding herself single again at the age of 52 with two teenage kids, Andrea decided it was time to join an online dating site in May of 2012.

She initially joined both Match.com and JDate. They say you have to kiss a lot of frogs to find a prince and I did just that, said Andrea. Having one bad date after another, she kept going offline only to go back online again.

When she met Dan, she thought he was very different than any of her other dates. They chatted online only a few very brief times and sent a few texts to put a date on the calendar.

On the way to their first date, Andrea decided to call Dan. She told him that this was the only time she had never talked on the phone prior to meeting a date. He said it was his first time as well. When they met, she realized they had so much in common. They talked for hours and didn’t even realize anyone else was in the restaurant.  After many rounds of our “all you can eat” soup and salad, they said their goodbyes and Dan walked Andrea to her car. Andrea tells said, He gave me a huge kiss and I was kind of surprised by it, but pleasantly!

Then their Cyber Love Story got tricky.

Three weeks went by before their scheduled second date, so Andrea didn’t think that Dan was very interested in her. She then canceled their date and starting dating someone else.

When that relationship ran its course, she rejoined Match for a second time. Dan noticed Andrea’s reactivated profile and “winked” at her. Andrea responded and wondered if he had recognized her, which he did. They made plans to get together almost immediately and finally went on their second date.

The two have been inseparable ever since and Andrea knows for sure, that Dan is the love of her life.  Andrea and Dan plan on moving in together and look forward to celebrating their one-year anniversary together in September.

Congratulations to Andrea and Dan who gave online dating a chance.

Julie Spira is a top online dating expert and founder of CyberDatingExpert.com. Julie’s the bestselling author of The Perils of Cyber-Dating and creates irresistible profiles for singles on the dating scene. For more dating advice, follow @JulieSpira on Twitter, sign up for the Weekly Flirt newsletter and like us at Facebook.com/CyberDatingExpert.