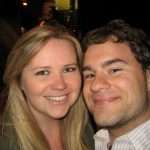 Lisa joined the online dating site OkCupid while she was still in college in southern California. She was busy working on her thesis on online dating for her major in Sociology so she thought she’d give the free site a try. She participated in their “quick match” game where each participant receives a picture and some information. She saw Kevin’s picture and clicked on “yes.”

Kevin was working as a computer programmer in northern California when he received an email from Lisa who lived hundreds of miles away. Fortunately fate brought them together when he also clicked “yes” when he saw Lisa’s photo. It was the epitome of a digital cupid!

As a student and waitress, Lisa couldn?t financially justify a flight up to San Francisco just to meet this guy she’d been talking to over the internet, so she painstakingly called in every favor of everyone she knew in order to get a job interview in San Francisco. ?It took her 6 months to secure the interview and another month to pick her outfit (not for the job, but for their first date.) Oddly enough, she ended up getting the job, and was able to move up to the same city where Kevin resided.

Because they were so far away, and didn?t meet for so long, ?they had the opportunity to do something that many people don?t get. They were able to get to know one another as friends. They hadn?t met in person, and didn?t want things to get romantic until they had done so. But they had such an incredible passion for one another, that they stayed up late every night talking on the phone for months, learning every detail about one another before their first date. Lisa and Kevin liked talking so much, that it was a short leap to full-fledged relationship. The first time he kissed her, she had this incredible jolt and ?got the strongest feeling that this was the person she was going to kiss for the rest of her life.

The relationship grew quite quickly and she moved in with Kevin. They have now been together for 19 months and she couldn’t be happier with him than she already is.

Congratulations to Lisa and Kevin where a simple class experiment turned into a beautiful relationship of love.

For consideration in the Cyber Love Story of the Week, send us your stories!