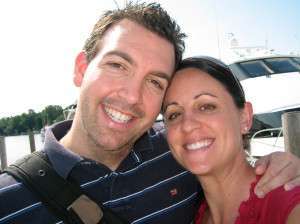 Todd and Rozie were both members of JDate where they were looking for love online.

Both the two of them were frustrated with the search process and were about to let their memberships expire.

Rozie decided to give the online dating game one last shot when she sent Todd an email that simply said, “You look cute. I like your profile.”

Rozie didn?t even have an online dating profile photo posted and most of the details in her profile were left blank.

Todd was hesitant to reply, but figured he’d say hello and ask her to send him a picture. He was glad he did so as when he received Rozie’s photo, he thought she was really cute.

After about one month of email exchanges and a few phone calls, they finally met up in person. Their first date was scheduled for drinks after work, but the conversation led to dinner. Dinner turned into afterglow drinks and their first casual drink date lasted for seven hours! The two went home separately at 2am, only because they needed to get to work the next day.

After seven months of dating, Todd proposed marriage to Rozie in a romantic way at the tallest tower in Krakow, Poland. It was the largest square in Europe.

They married a year and a half later and now have two children.

Julie Spira is America’s Top online dating expert and founder of CyberDatingExpert.com. Julie’s the bestselling author of The Perils of Cyber-Dating and creates irresistible profiles for singles on the dating scene. For more dating advice, sign up for our Weekly Flirt newsletter and like us at Facebook.com/CyberDatingExpert