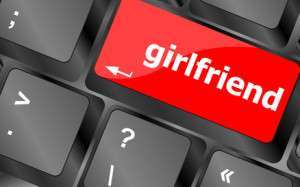 Dating labels for relationships mean more to a woman than they do to a man. It can be awkward when the guy you’re dating goes to introduce you to friends or business associates and doesn’t know whether to call you’re his girlfriend or not. Instead he’ll call you his friend in public, or will tell his friends that he’s been “hanging out with you,” even when he knows and shows you that his feelings are deeper for you.

To a guy, the label of girlfriend makes him think of additional responsibilities, which may include financial, legal, or even taking the walk down the aisle, which he isn’t just ready for yet. To make matters worse, to a guy, once the label is inked, he’s thinking his options are no longer open to find someone else, or even look back to the one who got away.

So the question is, if he acts like your boyfriend, takes down his dating profile, calls you daily, texts you daily, spends almost every night with you, says you’re exclusive, and is affectionate in public, why won’t he call you his girlfriend? It’s obvious that you’re an important part of his life, or otherwise he’d be out with his drinking buddies instead of holding you in his arms every night.

First of all, don’t get overemotional about it yet. You might wonder if you should give him the big ultimatum about your relationship status, let it slide, or have a conversation about mutual respect and expectations in a relationship. These are questions that you need to ask yourself. Before you go having the relationship talk and cause an explosion or breakup prematurely, look at these signs to determine where you fit on his relationship totem pole.

There are many reasons why he’s afraid to attach the label of “girlfriend.”

My suggestion is, after a reasonable amount of time together,  have a calm conversation with your guy. Ask him if it’s a good time to talk about something that’s on your mind. If he cares about you, he’ll know there’s something wrong and will want to fix it.

Acknowledge both your feelings about the label and his. Chances are, he won’t even realize there’s anything wrong with your relationship. He might have work pressures or other issues on his mind and be completely happy with the way your relationship is heading. Express why it’s important to you to acknowledge your status as a girlfriend in public and how you value the relationship. Take a moment and listen to what he says instead of getting overemotional and rambling on with nervousness.

Be prepared to leave the relationship if the answer isn’t what you want to hear. If he says you mean the world to him but still doesn’t assign a label to your relationship, believe him at his word. He might not be ready to change his Facebook relationship status or go ring shopping, but you might be on the track to falling in love.

Read: Are We Dating or Just Hanging Out

Know that if a man wants you to be his girlfriend and doesn’t want anyone else dating you or sleeping with you, he’ll do whatever it takes to make sure you’re his girlfriend and will be happy and proud to let the world know. He’ll show you from his actions how important you are to him.  He’ll make sure his friends and family know that you’re his girl. If he downplays the relationship as just casual and doesn’t talk about his long-term relationship goals, he just might not be the one for you. It may be time to start dating others and ditch the sleepovers to maintain your dignity.

One thing I know for sure,  a man will move mountains for the woman he wants to be with and there won’t be any uncertainty about your relationship status. Remember, King Edward VIII gave up the British throne when he fell in love with Wallis Simpson.

As soon as he realizes what a prize you are, he won’t want to let you go.

Do relationship labels matter to you? Your comments are welcome.

Julie Spira is America’s Top Online Dating Expert and Digital Matchmaker. She coaches singles on the dating scene and helps them find love online and IRL. For more dating advice, follow @JulieSpira on Twitter and sign up for the free Digital Flirt newsletter.

16 thoughts on “Dating Labels: Why Won’t He Call Me His Girlfriend?”