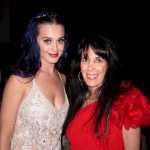 As a former music radio DJ, I was thrilled when the invite arrived for the ASCAP Pop Music Awards.

I had the opportunity to meet the lovely Katy Perry during the reception, who took the stage to receive numerous awards. Carly Simon treated us to a rare live performance of her hit songs, “Anticipation” and “You’re so Vain. On a day that started out in sorrow with the loss of American Bandstand’s Dick Clark, pop music writers were enthusiastic about being honored in Hollywood.