As the Presidential candidates continue to debate, our friends at Happn, one of our recommended mobile dating apps,  have shared with us which candidate their single members would rather hang out with, either Donald Trump (R) or Hillary Clinton (D).

Happn polled 965 of its users about what activities they would prefer to do with Trump or Hillary. The six options are based Happn’s latest “See You There” feature, which gets users to meet IRL for fun activities.

Are you ready to jog with Hillary or go on a night on the town with the Donald? See a movie with the Clinton’s or grab a drink with Donald? Before you turn on the television to watch the debate, read the results of this poll.

Get ready for the digital drum roll! 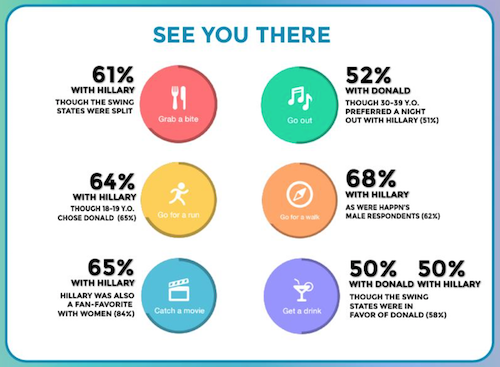 RELATED: Happn How Helps Users Meet Up With Matches Faster

3.     Get a drink: Do single daters prefer sipping martinis with Hillary or a (non-alcoholic) daiquiri with Donald? This vote was split 50-50. Women favor Hillary (72%), while men (59%) are down for a drink with Donald. But in the battleground states, Happn voters raise their glasses to Donald at 58%.

RELATED: 6 Mobile Dating Apps You Should Be Using in 2016

What about the Swing States?

Forty-two percent of Happn respondents identified themselves as Democrats, with 16% saying they were Republicans. Forty-two percent have either no political affiliation or selected “Other” (i.e. Libertarian, Green, Constitution).

*This article published by Cyber-Dating Expert, LLC and it’s affiliates do not endorse any political candidate

Will you be watching the debate?

P.S. If you haven’t registered to vote, we urge you to do now right here.

Julie Spira is America’s Top Online Dating and Mobile Dating Expert. She’s the founder of Cyber-Dating Expert and has been coaching singles for over two decades on how to find love on the Internet and on mobile dating apps.