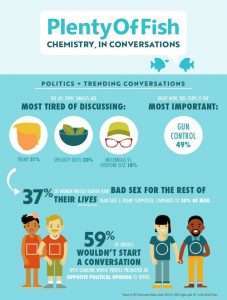 I’m a believer in truth-in-advertising, and as I said in my essay, Can Love Survive Trump, the challenges of dating in Trump’s America have been painful, and have resulted in reducing the dating pool by 50% for those with strong opinions on either side of the political spectrum.

This new survey of 2,000 singles in the U.S. conducted by online dating site Plenty of Fish shows that people are living and dating by their beliefs.

When I read the study, which claims that 34% of singles would rather have bad sex for the rest of their life than date a Trump supporter, I quickly realized this heated subject isn’t slowing down.  Our commander-in-chief still affects the way singles select their dates online.

The Conversation survey breaks it down further and states:

I asked POF’s Conversation Expert Celeste Headlee to weigh in and elaborate on these findings in the Conversation Nation 2018 study, to help answer questions that my dating coaching clients always ask.

Julie: Should singles post their political opinions in their dating profiles?

Celeste: It may not be a good idea to put your politics on your profile. As we can see, many people make quick decisions about dating based on political issues, and it’s much better (and less likely to cause friction) if you talk about them face-to-face.

Julie: When should someone bring up politics? Before a first date? In their profile? On the first date?

Celeste: It’s okay to choose one issue that you know you’re passionate about and bring it up on the first or second date, as long as you are kind while you do it, and have no intention of arguing. Let the other person know you’re just trying to see if the two of you are compatible.

Otherwise, leave that political conversation for the second or third date and don’t argue or yell at anyone. If they disagree and you can’t see yourself with that person, be honest and be kind.

Julie: Why has dating a Trump supporter become such a hostile issue?

Celeste: Dating a Trump supporter can be an issue for people because he’s the culmination of a long trend toward polarization and division in politics. Whatever you may think of him, the evidence shows he is the most divisive president in US history.

He has taken some extreme stances on many issues and that means he’s upset and offended people. So, it’s common for people to say that they can’t date a Trump supporter, or will only date a Trump supporter. We think that knowing someone’s position on the president tells us more about them than it really does.

Julie: Why is politics a bigger deal-breaker than bad grammar?

Celeste: One of the surprises in this study is that more people are turned off by bad grammar than by bad sex. But the number of people who won’t date across party lines is larger still.

At this point, it’s very difficult to avoid talking about politics, as nearly every aspect of our lives has become political: what we eat, what music we listen to, what movies we watch. So, it’s important to talk about politics with your date, but be prepared to listen more than you talk and not try to change anyone’s mind.

Julie: How can you communicate in a healthy way with someone with different political beliefs.

Celeste: If your goal is to learn about the other person’s opinions, instead of talking about your own and arguing your position, you’ll be much more likely to have a healthy conversation. If they say something you find troubling, you can say, “I disagree with you, but I’m interested in learning why you believe that.” It’s difficult and sometimes scary to talk about politics with other people, so be kind and be welcoming.

Julie: How can liberals and conservatives co-exist in the dating world?

Celeste: Liberals and conservatives can date each other and be happy. The most common reasons for divorce are money, cheating, and a lack of together time, not politics. If you can learn to allow the other person to have their own thoughts and opinions, to discuss without arguing, to stop trying to change their mind or convince them they’re wrong, you will get along just fine.

What happens in government will not, in the long run, determine the success or failure of your relationship. If you create a party loyalty test for all of your dates, you may end up walking away from someone who is a perfect match for you in every other way.

On that note, has dating in Trump’s America affected your choice of daters, or caused tension in your relationship?

Julie Spira is America’s Top Online Dating Expert and Digital Matchmaker. She’s the CEO of Cyber-Dating Expert and has been coaching singles on finding love online for 24 years with her Irresistible Profiles programs.

1 thought on “SURVEY: Singles Would Rather Have Bad Sex than Date a Trump Supporter”