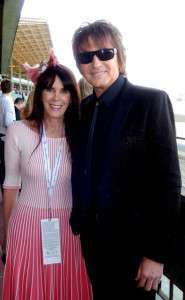 The week in Los Angeles ended on a fun note as I enjoyed the Breeders’ Cup festivities at Santa Anita Racetrack.

With the theme of “The Best is Yet to Come,” I spent the afternoon in the Trophy Lounge, along with Celebrity Ambassadors Bo Derek, The Hunger Games’ Elizabeth Banks, and John Ortiz, who played the horseracing fanatic ?Turo Escalante? in the HBO series Luck.

Women were dressed in a variety of hats and fascinators, many of which were designed by Christine A. Moore, the Official Milliner Of The 2013 Breeders’ Cup. Christine was kind enough to personally select a fascinator to go with my Armani dress, which even received a thumbs up from Elizabeth Banks.

Musical performers Kristin Chenoweth and Richie Sambora were on hand. Kristin laughed as we spoke on the Purple Carpet, as she admitted she was a “Runaway Bride,” not once, but twice. Kristin, with her new pixie haircut, appropriately selected the “Game on Dude” sign for her photo in the Twitter booth. Richie and I talked about growing up in New Jersey and shared which exits we both lived at. He was thrilled to have been selected to do the first guitar version of the “Call to Arms” as part of the ceremony.

From purple outfits to extravagant hats and an even more extravagant $25 million purse, Los Angeles was proud to host the Breeders’ Cup this year. Next year, the Breeders’ Cup will also take place at Santa Anita Racetrak, starting on Halloween. Will there be more orange outfits next year? Perhaps we’ll be able to say, “Orange is the new Purple.