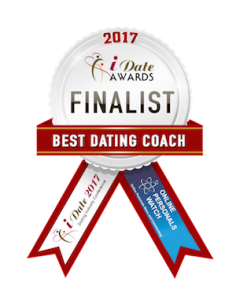 Of the many things I was thankful for during Thanksgiving week, one was the announcement of a male client who got engaged, the other was spending time with my family, and lastly, I found out that I’m a FINALIST for best dating coach in the 2017 iDate Awards to be held in Miami in January.

Voting is now open to the general public, so it would mean the world to me if you could cast your vote for Julie Spira – Cyber-Dating Expert for best dating coach.

While I was surprised to hear I was nominated, it warms my heart to know the industry realizes how passionate I am about helping singles find love.

It was over 20 years ago (22 to be exact), that I first embraced online dating during its infancy. It was before Match.com and eHarmony were even launched. After helping myself and mastering the sites and chat rooms, I then started writing profiles for singles, while still keeping my day job as a technology executive. Cosmo named me the “Pioneer of Online Dating” and after my bestselling book, The Perils of Cyber-Dating: Confessions of a Hopeful Romantic Looking for Love Online was released, my business expanded and I started writing dating advice for JDate, Match, eHarmony, Huffington Post, DatingAdvice.com, PlentyofFish, YourTango, and the list goes on.

After two decades of helping singles find love online, I created Mobile Dating BootCamp, which was featured in the Washington Post,  appeared in the New York Times on the growth of Tinder in 2015 and 2016, have been responsible for many marriages and engagements, several online babies, have appeared in over 1000 media articles, and have some exciting TV and film projects in the works.

I credit those I met at the iDate conferences for helping me spread the news and have attended 16 iDate shows! The January 2017 iDate Awards will be my 17th time at iDate and the thought of accepting this award brings tears to my eyes and joy to my digital heart.

Thank you to those who have nominated me to be a finalist and to those who are voting now that voting is open to the general public.

Being a dating coach brings together two of my biggest passions; my love of technology and my strong belief in love. I couldn’t be happier.

Thank you from the bottom of my heart for reading my articles, watching me on TV, reading my books, and for your vote.

Wishing you much love and joy in cyberspace, or wherever you may swipe or roam.

VOTE at iDateAwards.com from now through January 6th.