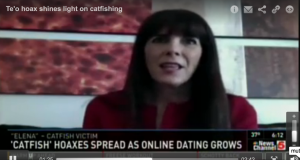 The phone starting ringing early in the evening on January 16th with news stations across the country wanting to know if the Manti’ Te’o story is common on the Internet.

In a Skype interview on KSDK in St. Louis, I talked about how to protect yourself from being a victim of a “Catfish.”

“The whole subject of fake profiles or falling in love with someone that doesn’t exist is sort of rampant,” says author and online dating expert Julie Spira.
She says some people are easy targets.

“They are so in love with love and they believe there is this unconditional love, and the moment someone shows them a lot of attention, if they’re lonely or if their heart has recently been broken and they become really vulnerable.”

“My number one tip is if you’re going to have a long distance pen pal with somebody and you’re flirting on facebook, text, or you’re on twitter or on an online dating site, get on the phone with them.”

She also says to google them, make sure their facebook pictures match the ones on the site where you met. And Skype with them.

“If somebody won’t hop on a Skype call, yet they’re saying I love you in a text message and they don’t want to hop on a Skype call or even a phone call and they’re talking about having children with you they are hiding something.”

And if you think someone isn’t who they say they are, she says contact the dating site and let them know.

Online Dating: Are You Dating a Catfish?