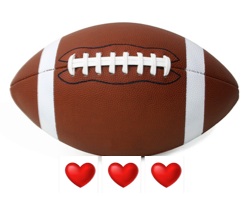 As we count down the days to Super Bowl 50 at Levi Stadium, whether you’re rooting for the Denver Broncos or the Carolina Panthers, one thing is for sure, it’s going to be an emotional and exciting two weeks for both men and women alike.

Women often wonder if men hate Valentine’s Day. Guys really want to know if women are cheering for their favorite team, or are they there just for the half time show.

This year, the Super Bowl and Valentine’s Day are exactly one week apart. Women get a bonus, as Valentine’s is on a three-day holiday weekend. Yes indeed. You can be romantic Friday, February 12th through Monday, February 15th with no excuses.

Valentine’s Day is the Super Bowl of Dating

I’ve gone on record as saying the Valentine’s Day for Women is like the Super Bowl for Men. It’s a double-header, so enjoy the ride. Most guys won’t even make a dinner reservation or ask a girl out until after Super Bowl Sunday. I encourage you not to wait until the last minute to ask your date to be your Valentine.

RELATED: HOW TO LAND A DATE FOR VALENTINE’S DAY

Here’s my side-by-side comparison of the Super Bowl and Valentine’s.

Meanwhile, across the hall, women have their own favorite holiday to think about, Valentine’s Day. With these two major events exactly one week apart, it’s obvious that the Super Bowl for men is revered in the same way as Valentine’s Day is for women. Whether you’re a sports fan or a hopeless romantic, comparing the two will help you understand how important these days are for the opposite sex.

Guys on the other hand, simply don’t understand that if you’re dating a woman and forget to plan something, just anything, for Valentine’s Day, you probably won’t get a date with her on February 15th, or shortly after. Guys, if you’re playing the field on mobile dating apps or flirting on Tinder, if you don’t ask our your digital crush, you lose. Game over.

Men wait all year for the Super Bowl, this big day in television. Women wait for Valentine’s Day, with the hope that their special guy will either propose, offer to take his online dating profile down, or say I love you for the first time. Women even secretly hope that the guy they are dating might want to change his Facebook status from ‘Single’ to ‘In a Relationship.’ It’s on the digital wish list for women, period.

Men are very prepared for the Super Bowl. They decide which venue to view the game at and with whom they would like to spend watching the teams battle it out. Women like to be prepared. They will start giving little hints out a month in advance about their favorite romantic restaurant, with the hopes the the guy they are dating will take the cue and book a reservation before their favorite eatery is fully booked.

However in contrast, when a man’s favorite team loses the Super Bowl, he will be disappointed, but will get over it. He’ll know there’s another chance next year and will spend the entire football season rooting for his team. If a woman’s favorite beau or someone she is dating doesn’t ask her out for Valentine’s Day, she won’t get over it.

Which team will you be rooting for this Super Bowl?

Julie Spira is an online dating expert and author of The Perils of Cyber-Dating: Confessions of a Hopeful Romantic Looking for Love Online. For more dating advice follow @JulieSpira on Twitter, sign up for our Weekly Flirt and like us at Facebook.com/CyberDatingExpert.

JUST RELEASED: Our 2nd edition of The Perils of Cyber-Dating is now available on Kindle and as an audio book, narrated by the author.

Listen to our book trailer here.