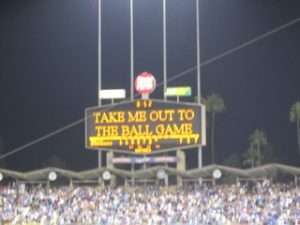 It’s been years since I attended a baseball game at Dodger Stadium. I often wondered why baseball was America’s favorite past time.

One day, an invitation arrived on Facebook from an old friend I hadn’t seen in 30 years. It simply said, “Let’s Go Mets!” I couldn’t resist saying no, so I accepted the invite from a true serious New York Mets fan. More than a Mets fan, my friend is a Mets fanatic. He arrived wearing his Mets tee shirt and shorts proudly displaying his favorite team’s emblem. He talked about how his life had changed years earlier, after attending Mets fantasy camp. The enthusiasm about the New York Mets playing against the Los Angeles Dodgers was contagious. I couldn’t wait to get to Dodger Stadium.

I sent out a tweet that said “Let’s go Mets!” and my online conversation started about the upcoming team. ?A friend of mine sent me a tweet saying the Mets will win by 5 + runs. The Mets had been on a losing streak, but I was hopeful they would win this one game. My Mets fanatic pal talked about his years of following the team around the country. It was his greatest passion. He had over 500 shirts with Mets logos on them and a house filled with museum quality memorabilia.

I arrived in time to watch a home-run. I got excited. I watched another ball player smash his face into the fence to catch the ball. It could have been a million dollar catch. I witnessed a marriage proposal on the big screen which said, “Robyn will you marry me? Love, Andrew” followed by, “She said yes!” ?I immediately shared this experience on Twitter. We sang “God Bless America” and “Take Me Out to the Ball Game” during the 7th inning stretch. We talked about love, marriage, relationships, and my friend admitted he had a crush on me 30 years ago.

The best part of the evening was, the Mets beat the Dodgers, 6-1. My friend on Twitter must be thrilled that he picked the game, my Mets fanatic pal got to see a victory, and I learned a little more about baseball, crushes, and friendship.