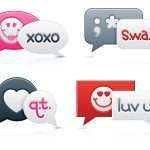 We live in a fast-paced digital world where texting and tweeting has replaced the human voice in matters of the heart. With digital dating, texts can make anyone anxious.

When it comes to love and romance, that good morning text or smiley face emoticon can make your day. Receiving a text when your date gets home to say he had a great time will help you fall asleep with a smile on your face. Hearing the chime on your phone with a simple, “Sweet dreams” is an almost guarantee that you’ll be dreaming about him.

On the opposite end of the digital spectrum, the absence of a daily text or a change in routine can send many in new relationships and the lovelorn into an unnecessary panic attack. Let’s face it. Women often tend to over-analyze the word count and sentence structure of every text they receive from men. What’s intended to just make sure you have a connection and to keep the momentum going often ends up with a bad reaction of sending a text you wish you hadn’t pushed the send button on, or not sending any reply at all. It’s enough to make you lose sleep at night, grab a pint of ice cream, or dial ten girlfriends to ask them what to do. It’s exhausting and unnecessary. It’s just a text or a way to ping someone to stay in touch, not a relationship measuring stick on whether he’s into you or not.

Most people are so attached to their cell phones that they sleep with them at night or would put them in the shower with them if they were waterproof. Texting can be addicting, but is a great form of digital foreplay.

If the rhythm of your texts has gone awry from your digital crush, here are some of the reasons why and tips on how to stay calm when your phone isn’t chirping or vibrating.

1.  He’s Busy. Men are typically goal-oriented and work and projects are at the top of their list. He might be stuck in a meeting all day out of the office and forgot to tell you his schedule. He might be compartmentalizing and getting his tasks done for the day before he starts to think about romance with you. He might be on an airplane without WiFi. The list goes on. If he isn’t texting you, it doesn’t mean you’re not on his mind. Women on the other hand are great at multitasking. They text, talk, tweet, and blow-dry their hair at the same time.

What to do: Take a deep breath. It’s just a text and not a life-threatening illness. Understand he may not even realize the last time he sent you a text. If you’re on his mind, he might think things are fine.

What to do: Reply back with a short text. Use an emoticon such as a happy face to acknowledge it.  Women tend to be more gabby. Guys who are busy read the text reply quickly and move on. Don’t look at his word-count as a lack of interest. He’s not keeping score, nor should you.

3. He Hasn’t Figured Out Your Relationship Status.If you started out as friends and moved into casual dating, he might not be sure if it’s time to get serious or not. Going steady is a big deal to guys. It means they typically won’t be keeping their options open anymore. Rather than disappearing permanently, his texts might become less frequent while he sorts it out.

What to do: Stop living and judging the health of your new relationship based upon the frequency of texts. Take the time to enjoy the moments you have together and don’t over think or spend your precious time projecting to the future. Allow your relationship to progress at its own pace. Women worry about relationship labels. Men think about how they feel when they are around you and miss you when you’re apart. When he realizes you’re a catch and doesn’t want anyone stealing his girl, he’ll amp it up. Don’t ask him why he hasn’t sent you a text in five days. When you hear from him, be happy and respond to keep the digital dialog going.

Read: He Texts Me Daily. Are We in a Relationship?

4.  He has a girlfriend or is involved. Some guys are just flirts by nature. They like to engage in digital conversations with women to boost their egos to keep their options open. If he’s texting you sporadically, but not putting a date on the calendar or changing plans last minute, he just might be setting you up as a back-up girl or might have had a bump on the road with his steady sweetie.

What to do: Ask him. Be blunt and honest. If he can’t schedule something with you on the weekends, but loves to text with you during the week, you should be filling up your date card and keeping your options open. Let him know you’d like to be friends, but don’t allow yourself to get invested in a relationship where you’re just the backup girl. Who really wants to play second fiddle?

5. He always replies a day later. Most of us are attached to our phones, but sometimes the battery life gets depleted, the phone is turned off, someone went to sleep early, family commitments get in the way, or they glanced at your text and decided to reply in the morning. All of these scenarios are natural. However if every text is returned 24 hours later, then realize that he just isn’t that interested in you or is playing hard to get. The digital flow just isn’t happening.

Watch: What to Do if He Only Wants to Text Me [vide0]

What to do: You can mirror his actions by taking another 24 hours to reply, but it’s just game-playing. Let him know that you enjoy receiving texts from him and the daily banter. If he still doesn’t up the ante, find someone else who can’t wait to see your text or emoticon on his phone.

Read: I Saw His Text Messages: Is He Cheating or Is It Over?

Remember, communication in relationships is key and everyone these days use their cell phones for calls, texts, tweets, and facebook comments or likes. Let your guy know that staying in touch when you’re apart and that his texts put a smile on your face. Don’t play texting games and punish him by not replying to his texts when he sends them. No one wants to be with someone who is playing too hard to get. Show that you appreciate it when he takes the time to send you a text. Keep those smiley face emoticons in your text replies when you’re happy to hear from him.

At the end of the digital day, texting is just one ingredient in the recipe for love, it’s not the sole defining factor in your relationship.

Julie Spira is an online dating expert and founder of CyberDatingExpert.com, where they create Irresistible Profiles for singles on the dating scene and help daters swipe right on mobile apps such as Tinder. For more dating advice, follow @JulieSpira on Twitter and sign up for the free Weekly Flirt newsletter.