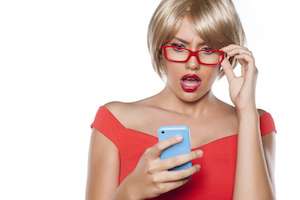 Every week I seem to get asked a similar question from a woman whose boyfriend is still on Tinder wondering if they should break up.

I have been dating a guy for 3 months now and just this morning we had a conversation where I asked him if this is what he really wanted (committing to being in a relationship with me), and he said, “Yes, this is what I want. I love spending time with you, I love how you make me feel (…)”.

I created a fake tinder profile a couple of weeks ago and swiped right on him. To my dismay, I just checked it and he had matched with “me” (picture and name of a different person, hence the fake profile) 9 hours ago (this morning right before our conversation.

My question now is what to do. I don’t feel I can trust him now as he had before said he was not talking to or seeing any other women. I feel a little betrayed. Should I confront him about this and tell him how I found out, or let it slide, or break up? Honestly don’t know what to do.

Should She Break Up With Him?

I’m sorry you’re going through this relationship anxiety with your boyfriend. This is the top question I get from female readers. (See the other links in this article from other women). They find out their boyfriend is on Tinder and want to dump him or don’t know what to do. I appreciate your honesty on how the past month has developed with your boyfriend. Let’s talk about a few things. I’m here to help you, but this is going to be tough love my friend, so get ready.

Three months is still new for a relationship. It’s the honeymoon stage, where everything is fresh and exciting. It’s the perfect stage, as you haven’t moved into a routine. Many relationships breakup at the three-month point, as some people only like the beginning stages of a relationship and don’t want to get serious. From where he sat, he probably enjoyed dating you and hadn’t moved to a more serious stage yet. He wanted to look at options.

You were happy enough with him to want your relationship to be exclusive. You asked. He answered. He might have told you what you wanted to hear, but he didn’t come out and ask you first to be in a committed relationship, although he said he wasn’t seeing anyone else.

Chances are he wanted to see where the relationship was going to go and got caught up in the Tinder swiping game. It happens a lot. If you’re sleeping together, he also might not want to give that up. He’s a guy. It’s how men are wired. You also don’t know if this morning when he said he loved how he felt with you, that he had swiped for the last time and was ready to delete his Tinder account, right?

RELATED: HELP! I FOUND MY BOYFRIEND ON TINDER

In all honesty, this is where the problem started. There’s a saying, “Seek and ye shall find.” Why did you create a fake Tinder profile to try to catch him? Probably because you weren’t sure he wanted to be exclusive with you.

Let’s talk about trust. It works both ways. You felt insecure about your relationship status early on and didn’t trust him. You wanted to catch him and behind HIS back, logged on as a fake person to see if he’d take the bait. It worked, he’s busted and now you’re unhappy. No guy wants to feel like his girlfriend is checking up on him, even if it’s innocent.

I’m not sure if you met on Tinder and if you took your profile down and he didn’t, but at two months, he probably wasn’t ready to be exclusive, or he would have said so. When a man wants a woman to be his, he does what it takes to make her is girlfriend. That includes taking down all dating profiles in good faith to see where the relationship will go.

The moment you think someone’s cheating or looking elsewhere is the moment you realize something isn’t right. Rather than seeing where your relationship would go over time, you tried to catch him, and you did.

Here’s a shocking fact. A GlobalWebIndex survey found that that 42 percent of Tinder’s members are already in relationships. Think about it. Almost half of the users are playing around on Tinder. Some are swiping only. Others are chatting only. Many are meeting and hooking up. Your boyfriend may be one of those 42%.

It would be one thing if someone in a relationship was on Facebook, Twitter, or Instagram all of the time. They’re social networking sites. Many people are finding love on social media, but Tinder is a dating (and even known as a hookup) app. If you’re in a relationship and someone is active on a dating app, guess what? It’s wrong. I don’t care about the percentages, it’s wrong, period. Having an active profile on Tinder when you’re in a relationship tells the world that you’re single and looking. From your boyfriend’s perspective, he thought he was single and was keeping his options open. He also swiped on your fake profile before you had the conversation.

I understand that some guys and women too, like the validation they get when someone swipes right on their profiles. It’s a digital ego stroke. I also know that Tinder is like a game and people like to see who is out there and swipe right and never speak.

The problem Nina is something’s off in your relationship. You weren’t on the same page at the same time. If you trusted him, you wouldn’t have created a fake profile after two months. You know that a relationship is based on mutual trust. Without it, it cannot survive in the long haul.

RELATED: HELP! MY BOYFRIEND WON’T TAKE HIS TINDER PROFILE DOWN

He says he’s happy and loves spending time with you, which is probably true. But he’s also happy swiping right on Tinder.

I know if it were me, I wouldn’t put up with it. It’s a deal-breaker. I’d want to be in a relationship built on mutual trust. I can’t say if it’s a deal breaker for you, but as soon as you tell him you’ve busted him with a fake Tinder profile, or make up a white lie and say that someone found him on Tinder, I guarantee he will break up with you. You’re asking me if you should break up with him. I think you know the answer. The trust isn’t there.

So you can continue to be quiet and log onto your fake profile to see the exact moment he last logged on and make yourself sick in the process, or try to find someone who will think you’re amazing enough to ditch the dating apps to be in your arms. The choice is yours. I can only hope that you take your fake profile down and never create another one to try to snoop on a guy you really like.

I’m sorry you’re going through this now, but being on a dating site when you’re in a relationship is disrespectful. So is trying to catch him with a fake profile.

My best advice to you is as follows: The next time to have trust in a new relationship. Let it unfold naturally. Men don’t like being with an insecure needy person. If you felt the need to snoop, it was doomed.

RELATED: DATING IN A TINDER WORLD

Do you have a dating question for Julie? Send your questions here:

Julie Spira is America’s Top Online Dating and Mobile Dating Expert. She was an early adopter of Internet dating and has been helping singles find love online for over 20 years. For more dating advice, sign up for the free Weekly Flirt newsletter.

GET SOCIAL WITH US!

Find out how Swiping Right will help you find your dream date on Tinder and mobile dating apps.

8 thoughts on “Boyfriend is on Tinder. Should I Break Up”