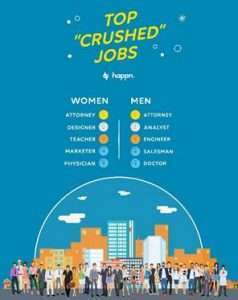 Thinking of going to law school? If love is on your mind, your odds of finding a date by joining a non-drinking bar are at the top of the list.

A survey from mobile dating app Happn analyzed 2.9 million users in the United States between April 1-11, 2017. They found that singles matched, or “crushed” with dating profiles of lawyers most often.

For both men and women, the desire to date an attorney ranked as number one in the top five list.

Other sexy professions of guys include being an Analyst, Engineer, Salesman, or Doctor. Happn’s list of the 5 most crushed women also include Designer, Teacher, Marketer, and Physician.

RELATED: These Jobs Will Get You the Most Right Swipes on Tinder 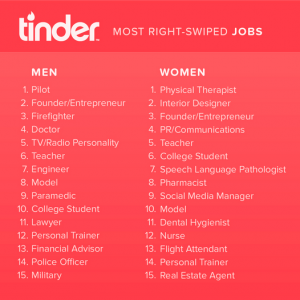 According to Tinder, below being a Pilot, if you’re a  Founder/Entrepreneur, or Firefighter, you’re in the top 3 careers that will get more right swipes on male profiles. We get it. A Pilot can be sexy, but he won’t be around much. A Founder/Entrepreneur might be creative with a big bank balance, or at least some stock options, so he’s got long-term potential. A Firefighter or Doctor will save lives and can become your own personal hero. In short, women loved a man in a uniform.

As for the women, being a Physical Therapist tops the list as men are imagining her personal touch, somewhere, somehow, or anywhere. An Interior Designer was a bit surprising at number 2, but there’s something intimate about decorating a bedroom with candles and more. As far as number 3 is concerned, it’s enlightening to know that a man is interested in both beauty and brains, so kudos to those who want to date a smart and confident woman. Perhaps they’ll remember to leave the Board Room out of the bedroom.

Taking it a step further, Mashable released a list of most swiped jobs city-by-city to show there’s not a one-size-swipes all best job across the country.

Julie Spira is America’s Top Online Dating and Mobile Dating Expert and Digital Matchmaker. She was an early adopter of the Internet and has been coaching singles for over two decades with her Irresistible Profiles programs.