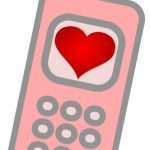 You may have a high IQ and a smile that makes guys hearts melt, but what happens when your attachment to your mobile phone ranks higher on the totem pole than your date? As July marks National Cell Phone Courtesy Month, it?s time to pause and take notice on how discourteous we?ve become as we continue to spend the majority of our time attached to our smart phones.

According to the International Telecommunications Union, there are an estimated 5.3 billion mobile subscribers worldwide and the number is growing. In addition, 6.1 trillion SMS messages were sent in 2010. It?s no wonder with these numbers that cell phone etiquette, or in reality netiquette is on the decline.

So how does this enormous mobile phone usage affect matters of the heart?

In a recent survey on the relationship between cell phones and dating, social dating community Zoosk found out their members were extremely frustrated as they constantly competed with cell phones on a date. In short, daters are regularly breaking the rules of netiquette in a variety of ways with glancing at their cell phones during a date leading the list.

Alex Mehr, co-founder and co-CEO of Zoosk said, ?”We are surprised to hear that flagrantly reckless cell phone behavior has driven one third of singles to actually get up and excuse themselves from a date altogether. It’s our hope that singles follow proper cell phone etiquette to ensure that a mobile faux pas doesn’t ‘cell’ their date short.”

I?m personally not surprised in the least by their findings, as I?ve gone on record as saying, ?Your mobile phone isn?t an accessory.” I believe that unless you?re expecting a call from the President of the United States or a kidney transplant, your should leave it in your purse or pocket while on a date.

So without further digital adieu, here are some of the results of Zoosk survey.

At the end of the digital day, leave a voicemail message for your sweetheart and make sure they remain higher on the totem pole than your mobile device.

Do you have any mobile dating pet peeves? Comments and thoughts are welcome

Julie Spira is an online dating expert and coach and creates irresistible profiles for singles on the dating scene. She’s the author of the bestseller, The Perils of Cyber-Dating. Visit her at CyberDatingExpert.com, like her at facebook.com/cyberdatingexpert and follow her on twitter @JulieSpira