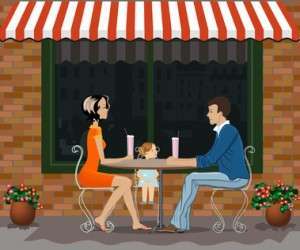 Dating in your 30s and 40s often means dating men with kids and vice versa. The exact time to introduce your children to your new boyfriend or girlfriend is still up for debate. What’s absolutely not appropriate is bringing your child along when meeting a potential suitor for the first time.

In this Peril of the Week story, a woman agreed to go on a dinner date with a man she met online. When she arrived, the woman was shocked that her date had brought his six-year-old daughter, whom he had never mentioned nor made any indication of having a child on his profile, with him on their first date. Apparently, it was his weekend to have her. Why he didn’t reschedule, or, better yet, hire a babysitter, she never found out. But the girl proved to be a royal pain in the behind.

While deciding what to order, his daughter wanted to get a burrito, but her dad reminded her that she didn?t like the burrito last time and suggested she get the fish tacos instead. Well that didn’t go over smoothly. The little girl threw a whiny fit until she got what she wanted and ordered the burrito. Of course, when the burrito came it wasn?t what she wanted. Instead, she wanted her father’s date’s tacos. Wanting to eat the tacos instead of the burrito, she assumes she must have given her date some sort of look because the man yelled, “Just give her the damn tacos!”

At a complete loss of what to do, the woman felt like she had to give his daughter her tacos. Since she was really looking forward to the fish tacos, she placed a second order and sat there watching her date and his daughter chow down without her (which is just so rude in it of itself). By the time her tacos arrived, they were both done eating and the daughter was ready to go.

Finally, when the check came, her date asked for the second order of tacos to be on a separate bill, paid his portion and left her sitting there to finish her meal alone along with the check. Thankfully, the waiter seemed to understand her predicament and told her that her tacos were on the house.

Do you have a dating disaster story to share? The Peril of the Week was contributed by Big Red Flags.

Julie Spira is a leading online dating expert and the author of the bestseller, The Perils of Cyber-Dating: Confessions of a Hopeful Romantic Looking for Love Online. Visit CyberDatingExpert.com for dating advice and to share your online dating stories. Follow Julie on twitter @JulieSpira and like her at Facebook.com/CyberDatingExpert

1 thought on “Peril of the Week – Tacos for Two”