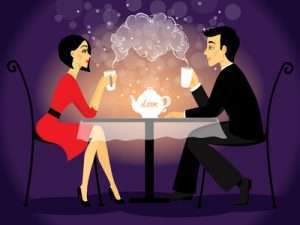 Dating issues seem to be coming in themes these days.

In the past week, three women have come to me with the same dating dilemma. They’ve met terrific guys online. One on OkCupid, another on Tinder, and one on JDate. All three men are super-successful and are very driven in their careers. They’re the guys who are too busy to be players and truly want to be in a monogamous relationship.

In all three scenarios, the men have asked the woman for exclusivity. Sounds great, right? Well, not exactly.

One woman has been dating a terrific guy, whom she met on Tinder. After six weeks they had the conversation about becoming exclusive. They both projected to the future. The problem is, she’s lower on the totem pole, as his work is a priority. The more she tried to spend time with him and fill his calendar with fun events, the more he pulled away. Eventually, he started spending weekends without her, even though there was no one else he was interested in.

The second woman met a great guy on OkCupid, whom she thinks is her soul mate. They’ve both said they’re in love with each other, but after six months of dating, he still focuses on his work and children on the weekends. The more frustrated she gets with the situation, the more distant he becomes. She sees a future with him, someday. But today, she’s walking on eggshells. What should she do?

The third woman met a fabulous guy on JDate. He told her on the second date that he thought he was falling in love with her and saw her in his future. He wanted to see her every night, until one day when he stopped returning her calls and texts. She’s devastated. She thought he was ‘the one.’

If you can relate to any of these situations, you’re not alone.

All three of these guys were building their castles and were defining their success as a man based upon their career success. While juggling children from a prior marriage, a busy career, and girlfriend, the girlfriend ended up in last place. It wasn’t that these guys weren’t crazy about the women they adored. They would do anything for them… if it was on their schedule. They were doing the pull back and these women were hurting at the sudden change of heart.

Between rebuilding from a divorce, keeping a family together, maintaining a career path to provide for financial success for the women, they couldn’t juggle it all. The more the women pushed to be with them, the more they pulled away. It’s the ever-so-common pull back and it’s gut-wrenchingly painful when it’s happens to you.

Ladies: When guys are in work mode, you’ll probably hear from them less.

There’s no need to stress and think it’s over.

My suggestion to all three of them, and to you if this is happening in your life, was to let them build their castle. Be at their side when it’s convenient for you. Don’t send text messages asking what’s wrong, or you’ll run the risk of pushing him away, period. No guy wants to feel like he’s dating his nagging ex-wife. Also, when a guy starts to fall in love with you, he gets scared. There are a lot of reasons for this. Before they make that commitment that seems to be permanent, they might want to view other profiles of singles on a dating site, even if they have no desire to go out on a date. They may fear never having sex with another woman again. A lot of thoughts go through their minds. As they’re processing all of these emotions, they often pull away.

Understand that you’re not playing a game. You’re just letting the man lead, which is in their DNA. If you ever feel that your needs aren’t being met at all, then by all means, have a conversation about it, but don’t beat it to death or give ultimatums.  It’s your decision to stay in any relationship. Men will come and go as rubber bands and often they’ll just need the space to be in their caves from time-to-time.  It’s really OK, if they come back to you. In time, your relationship will develop into a groove and you won’t have to worry if he forgets to send you a good morning text. Perhaps he’s just busy. It doesn’t mean you’re not on his mind. Give him his space and if you truly are ‘the one,’ he’ll return without even realizing he’s been gone.

Have you experienced the pull-back in a relationship? Your comments are welcome.

Julie Spira is America’s Top Online Dating Expert and the founder of CyberDatingExpert.com. She was an early adopter of online dating and has been helping singles find love online for 20 years. For more dating advice follow @JulieSpira on Twitter and sign up for the free Weekly Flirt newsletter.

52 thoughts on “What to Do When He Pulls Back”