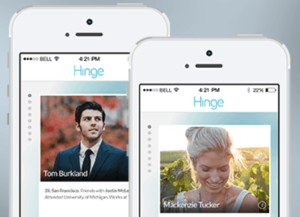 In a recent interview, I spoke with ABC News in Los Angels about the landscape of mobile dating [see video below].

Enter Hinge, a free mobile dating app which helps you find dates based upon which Facebook friends you have in common. The best way that I can describe Hinge is Tinder MEETS Linkedin.

The concept makes sense as singles have become accustomed to swiping on Tinder, the mobile app now responsible for over 10 million matches a day and 800 million swipes per day.

Where Tinder gives you unlimited matches based upon your location, Hinge selects 10 matches served to you at noon each day. If you refer your friends to join Hinge, the number of matches will increase.

Hinge takes your Facebook profile photos, age, work information, and other data that you’ve provided, so other singles will see exactly who you are, without having to do an extensive Google search or background search.

Hinge users are 99% college educated, and most popular industries include banking, consulting, media and fashion. The average user has 36 friends on Hinge and 90% are between 23-36. Hinge has made over 2 million matches and just celebrated the first engagement.

Hinge just launched in Los Angeles with a party in West Hollywood at Greystone Manor with 500 of their 7000 Los Angeles singles who were on the wait-list. ABC 7’s Elex Michaelson reported on the event, along with my analysis below. 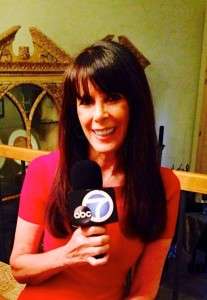 It should be no surprise, that online daters are now spending more time on dating apps than they do on the sites themselves. IBISWorld reports that by 2018, more than 80 percent of the population will own a smartphone (up from 46 percent in 2012). A recent Pew Research study reported that 29% of cell owners describe their cell phone as ?something they can?t imagine living without.?

eHarmony reports that some users log on over 15-20 times a day using their mobile dating app with over 50% registering from their mobile phones. Their mobile app has been downloaded over 9 million times, with 57% of their app users who are male and 43% who are female.

Match just released Match 3.0, a completely redesigned mobile app for iOs. They report that half of their users are joining Match through a mobile device and more than 50% of the emails exchanged on Match.com are sent from a mobile device.

POF founder Markus Frind tells me that they have tens of millions of users on their mobile dating app. “Between the apps and just mobile web use we are at 90% mobile,” said Frind. “When it comes to online dating using a website isn’t something that most people do anymore. It’s all about the phone,” Frind added.

At the end of the digital day, finding love from the convenience of your mobile phone has become a part of everyday life for most single who are looking for love online.

Are you using mobile dating apps?

Julie Spira is America’s Top Online Dating Expert and Digital Matchmaker. She’s the founder of Cyber-Dating Expert and host of Mobile Dating BootCamp. Julie was an early adopter of the Internet and has been helping singles find love online for 20 years. For more dating advice, follow @JulieSpira on Twitter and sign up for the free Weekly Flirt newsletter.