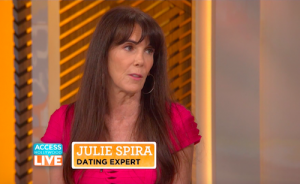 Heartthrob Ben Affleck has moved on, so how should Jennifer Garner feel about it?

Access Hollywood Live has been following the story of Ben Affleck’s new romance with SNL producer Lyndsay Shookus, and I was asked to weigh in on their public appearance

ACL hosts Natalie Morales and Kit Hoover asked me if if was too soon for the couple to become official.  After all, Jen and Ben only filed for divorce three months earlier.

While I don’t have the crystal ball and everyone deserves to find love and happiness after a divorce or a split, it’s too soon to know whether it will last. The couple appears to be happy and in the honeymoon phase of their relationship.

The reality is, men do typically move on more quickly then women. Men often overlap and go from relationship-to-relationship, often grabbing onto a rebound relationship quickly, while women tend to mourn and take the time to grieve the ending of a romance that didn’t go the distance.

“That doesn’t mean the new relationship will last forever. It really doesn’t even mean your ex has upgraded. It just means they’ve found a replacement person, for now.”

So how does someone go on (like Jennifer Garner), when you see your ex in a new relationship? In Jennifer’s case, it’s very public, however these days, everyone’s relationship statuses are public because of social media. The world wide web is filled with social media celebrities who chat IRL with Hollywood celebs in a digital world.

Page Six reports that Garner isn’t too happy with the news of Affleck’s romance. The new couple have been seen all smiles in Los Angeles.

“Even if your sweetheart is on vacation thousands of miles away, you’re going to see it online or on Facebook, and you’re going to think, ‘My gosh, it’s happening right in my living room.’ It really does sting when you see it so publicly.”

RELATED:  5 Ways to Cope When Your Ex Starts to Date

Julie Spira is a celebrity dating coach, relationship expert, and online dating expert. She’s the founder of Cyber-Dating Expert and has been coaching singles for over 20 years with her Irresistible Profiles programs.