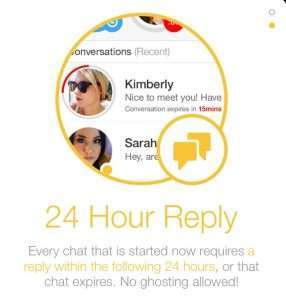 To help prevent ‘ghosting’ dating app Bumble has just evened the playing field for the guys with their new “24 Hour Reply” feature.

The app, where women make the first move, had originally required women to reply to a mutual match within 24 hours or the match would expire. The guys on the other digital hand, could wait to reply to the women as long as they wanted to.

As reported on Mashable, Bumble’s CEO Whitney Wolfe explained that men had “essentially forever” to respond to the women’s initial emails keeping the women waiting, or resulting in guys not replying at all.

Since Bumble’s launch, women have made the first move over 50 million times on the mobile dating app.

Now, Men Must Reply in 24 Hours on Bumble

Now the men will also be on a 24-hour notice as the countdown clock to reply to women will start once they receive an email.

Wolfe told Mashable that with LGBTQ couples, either person can start the communication within 24 hours, but the person who receives the first message must also adhere to the new 24-hour rule as well.

Earlier this year, I was interviewed by ABC News about Bumble and how it was empowering women everywhere and had become a favorite among men, who wire tired of swiping right and getting matches, but few replies from the women.

The 24- hour timer will make men step up to the plate, or the match will disappear, forever.

I’ve always said, “the squeaky wheel gets the digital love deal.” This puts this strategy to the test. 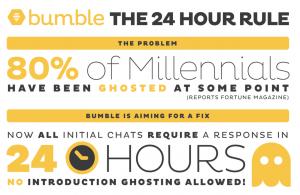 Bumble still will be empowering women by requiring that they make the first move when matched.

Earlier this year they added a new social networking feature to help you find a same sex friend to hang out with, expanding their service outside of dating.

Guys, are you ready to step up to the digital plate and start chatting with the women?

Your comments are welcome.

Julie Spira is America’s Top Online Dating and Mobile Dating Expert. She was an early adopter of Internet dating and has been coaching singles on finding love online for two decades. Julie’s the author of the bestseller, The Perils of Cyber-Dating: Confessions of a Hopeful Romantic Looking for Love Online and has been featured in the news over 1000 times on the subject of dating in a digital world.