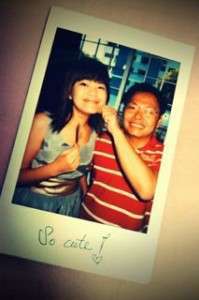 SpeedDate was just another application on Esther’s Facebook account. She didn’t have high hopes for meeting someone online. She just wanted a place to meet people and make new friends.

Tan was also a member of SpeedDate, but he knew what he wanted. ?He was looking for a more serious relationship. He sent Esther a message and the two began chatting on the site. After a month, they exchanged numbers and casual SMS messages. One night, during their chat, they both realized that fate had brought them together. They met after a few months, and their hearts melted together.

Esther has not been able to stop smiling since they met. The two will be getting married in February, 2011.

Congratulations to Esther and Tan from your friends at CyberDatingExpert.com.

Do you have an online dating story to share? Please send us your submissions.