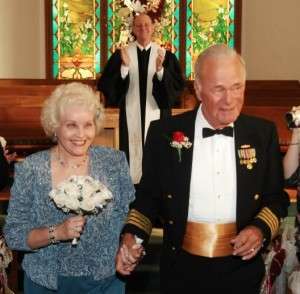 It was Love at First Sight for Joan and Richard who met on SeniorPeopleMeet.com.

The first time Joan got married was at the age of 17, shortly after she graduated high school. Widowed after 43 years of marriage, Joan decided to try looking for love online.

She was looking for a companion who treated her with respect and didn?t take life too seriously and joined a few Internet dating sites. At first, Joan was less than impressed with the online dating process.? She thought the people seemed more interested in hiding behind their profiles and e-mailing than actually meeting one another

One day, she joined SeniorPeopleMeet where she was only browsing profiles — that is, until she received an email from Richard.

Like Joan, Richard was widowed as well. ?He was a retired naval captain and liked the way Joan presented herself on the website, with current pictures and ?no sunglasses.?? At age 75, Richard was clearly older than 67-year-old Joan, who wasn?t sure about the age difference at first. Joan lived in northern California at the time.? After some successful phone calls, the couple met up in San Diego when Joan visited for a business convention.? Ultimately, it was Joan?s daughter who encouraged her mother to meet Richard in person by simply saying, ?What have you got to lose??

On their first lunch date, the two heard more than one comment from strangers about what a nice married couple they looked like.? One day after meeting, Joan turned to him and said, ??Is this what they mean by love at first sight?? to which Richard responded, ?Yes, I think it is.?? They spent the rest of her trip together, and maintained a long-distance relationship from October 2008 onward.? In January of 2009, Richard asked Joan to marry him. She moved from Sacramento to Coronado and the two were married in February, 2010.

Congratulations to Joan and Richard who both got a new start at love on Senior People Meet.