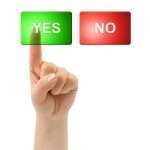 It started out as an email sent from a man in New York who was a member of a popular online dating site. The recipient, an attractive intelligent single female shared the introductory email with some of her friends on Facebook, myself included. She wanted to know if she should go out with the man with the red flags. At first she thought it was hilarious. I told her not to go. Her curiosity got the best of her, so without further adieu, here’s an example of a date destined to go bad.

His first email appeared to be a ‘cut and paste’ to many filled with a negative attitude. It read as follows:

“This may sound rude/odd but…what’s wrong with you? I have found there has to be a catch if I come across a cute, seemingly intelligent, well manner girl on this site.”

“I have tried this online dating thing for a while and to be honest… IT SUCKS!!!

“In the last month or so, I have been: stood up three times, canceled on at the last minute, met a girl who started to make out with another random guy at the bar while I watched, found out mid-date that the girl was inky 21 when her profile said she was 29, had a girl tell me how she is still in love with her ex, been told the day after a first date that she was getting back with her fiancé, but would love to use me for sex and my favorite…told that I was part of a “30 dates with 30 guys in 30 days” dare and that I had no shot. Fun times, right?????

“Now…based on the fact that you seem pretty awesome and the fact that I am apparently not cool enough to have plans on what should be a beautiful Friday night…How would you feel about being totally spontaneous and meeting me this evening? (who knows we might even like each other and get to make out?)”

“Now, I know you may want to email back and forth for days and then build up all this excitement hoping you found “the one”…but…I have found that usually leads to disappointment and then possibly therapy and sadness, right? Let’s skip all that nonsense and meet right away…OK? It will save us the let-down in the long run.”

“Now if you call/text/email, we can have possibly the blindest of dates…(assuming you don’t stand me up) or we can flirt via text from now until we do meet and build up expectations. Your choice, but first, please warn me about what is wrong with you so I know going into this that there will be little surprise! ;-)”

With an email like this, I would have done one of two things. Either deleted it without response and forgotten about it, or send an email saying ‘No thank you. Best of luck with your search.’

Comments from her friends included, “Just be careful” to “This is hilarious. Go and report back to us.” I explained that it was a mass email sent to many other women and told her not to go. Online dating safety is a hot button for me. I had a bad feeling about this from reading just the first sentence of his email. I thought she should use her time wisely and find a man who is positive, emotionally healthy and worthy of her. I told her to do her homework, Google his email and phone number to find out more about him if she really wanted to pursue this. I had a bad feeling. I was told that I was too serious and that this was hilarious.

She did indeed go on a date with him, which was a disaster. She said she should have known that he was going to be crazy. After resfusing to tell him where she worked or lived, he left her in the bar. That would have been fine if it was over, but it wasn’t. He started to send her mean and nasty text messages. She asked him not to contact her again, and he said ‘no.’

Not only does this date qualify for The Peril of the Week, but it’s a warning message to spot the red flags and remember how to date safely. Don’t give out your home or work address, create a separate phone number on Google voice so you can change it if you continue to get harassed by a date gone badly, and trust your intuition. Listen to your friends if they are concerned about you. There are many wonderful singles looking for love online, but if you come across a situation or profile like this, report it to the Internet dating site you met on.

Do you have an online dating story to share?
Send your submissions and like us at Facebook.com/CyberDatingExpert