A new politics study from Pew Research Center confirms the pain that many of you have been feeling both online and offline; friendships and romance are feeling stressed when the subject of Donald Trump comes up, and inevitably it will.

The Pew poll of over 2,500 adults conducted from June 27 – July 9, 2017, and released on July 20, 2018, shows that a majority (52%) of American’s are paying attention to politics since Donald Trump was elected president, with almost 60% of women driving the political conversations.

Almost half of the Democrats in the study admit that supporting Donald Trump is putting a strain on relationships, and members of both parties believe that someone supporting the other party didn’t share the same values and goals as they did. Most of us know someone who has lost a friend or romantic partner due to differing politics, right? 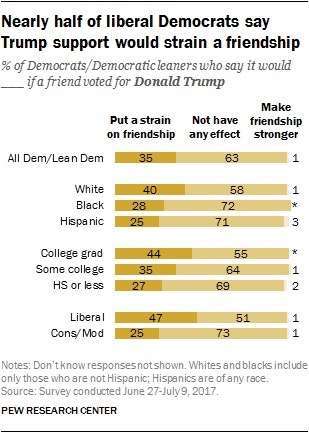 I believe this strong divisiveness is a reality that isn’t going to go away soon.

While researching my upcoming book, Love in the Age of Trump: How Politics is Polarizing Relationships, I have seen similar findings, with women being less willing to date across party lines than men. I’ve also witnessed the testing of friendships, and people who quickly unfriended and blocked people they used to be close with on social media.

As someone who’s in the business of forging love relationships, I believe in taking an inclusive approach, and for people to be open-minded about listening to another point of view, but I’m even more aware that the struggle is real, and the stress that Pew has confirmed is as intense as the reality show that our country is living in.

RELATED: Love and Loss in the Age of Trump

I’ve gone on record as saying politics ranks higher on the dating totem pole than dating a smoker who could quit.  In addition, we’ve added the subject “politics” to all of our dating coaching consultations, and have found the majority of liberals said they wouldn’t date a Trump supporter, with the majority of conservatives said they’d prefer not to talk about politics. 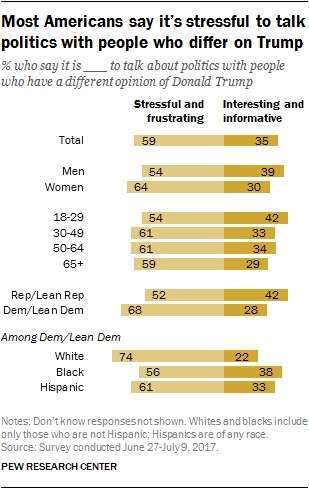 When dating site OkCupid asked the simple question of “Trump?” in their online questionnaire, the majority of their members who answered said, “Hell no,” and since 90% of their members support the ACLU, singles are proudly including the #RighttoLove badge in their profiles as part of the partnership with the ACLU.


If you’re single and living in D.C., there will be slim pickings when it comes to dating. Politico reports that if you work for the Trump administration, it’s hard to find a date,  but this isn’t happening just in D.C. I see it everywhere.

These days, on Facebook, even a political cartoon can result in a visceral reaction from your friends. 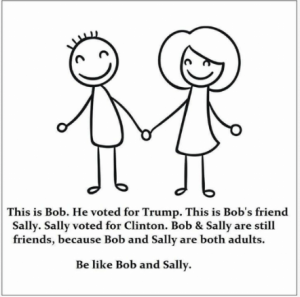 I was told I wasn’t taking a strong enough position against my Trump-supporting social media friends, even though the majority of my friends did lean to the left.

I have strong views and opinions where it comes to our current administration but have an even stronger desire to make sure love prevails past Trump’s current or potential future term.

RELATED: SURVEY: Singles Would Rather Have Bad Sex Than Date a Trump Supporter

If Politics is Important to You, Wear it Proudly

Yes, Donald Trump has polarized our country, our families, and our friends. Wearing a political baseball cap including “#NOTMYPRESIDENT” or on the opposite side, a “MAGA” hat, are now both front and center on dating profiles.

OkCupid profiles are proudly filled with the #RighttoLove badge, and singles now instruct potential partners to “swipe left if you voted right.”

This presidency has brought the conversation about values and attitudes to the table, and I believe that’s a good thing. Finding someone like-minded about the issues that are the most important to you will help you find a partner to join you on this turbulent journey in Trump’s America.

Julie Spira is America’s Top Online Dating Expert and is the CEO of Cyber-Dating Expert. She’s the author of the upcoming book, Love in the Age of Trump: How Politics is Polarizing Relationships and has been coaching singles for almost 25 years on finding love online.