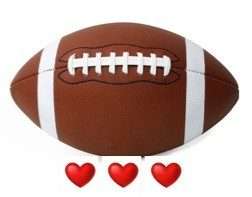 I’ve gone on record saying the Super Bowl for men is like Valentine’s Day for women.

As we count down the days to the 52nd Super Bowl (LII) at US Bank Stadium in Minneapolis, whether you’re rooting for the AFC championship team, the New England Patriots or the NFC championships team, the Philadelphia Eagles, one thing is for sure, it’s going to be an emotional and exciting two weeks for both men and women alike.

It’s that big of a deal for both sexes and here are the reasons why.

Women often wonder if men hate Valentine’s Day and a report by WalletHub says 53% of women say they’d break up with their significant other if they got nothing for Valentine’s Day. The same report shows that 9 million marriage proposals will take place on February 14th.

Valentine’s Day is the third-largest consumer holiday of the year, with over $18 billion dollars spent in the name of love!

Back to sports, men often wonder if the women are authentically cheering for their favorite team, or if they really like football at all.

Most men don’t want to be distracted by women while watching the game, unless they’re viewing the cheerleaders on TV. Guys wait all year for this day and romance is put on hold until one team gets the ring, one that doesn’t include a diamond center stone with the promise to have and to hold forever.

We know between football pools and the high cost of advertising, this Sunday will be an expensive day for many.

This year, the Super Bowl Sunday and Valentine’s Day are ten days apart.

With Valentine’s Day being held in the middle of the week on a Wednesday, some decide to celebrate the holiday over the weekend before, on February 10th-12th, or on the long President’s weekend of February 16th- 19th, to avoid the huge expense on that one night of the year.

The pressure on Valentine’s Day is enormous. The pressure for your favorite team to win the title of Super Bowl Champion is at an all-time high.

Valentine’s Day IS the Super Bowl of Dating

These next two weeks are truly a double-header, so enjoy the ride. Most guys won’t even make a dinner reservation or ask a girl out until after Super Bowl Sunday. I encourage you not to wait until the last minute to ask your date to be your Valentine, or you might find out that she’s made other plans.

RELATED: Valentine’s Countdown: How to Land a Date

Whether you’re a sports fan or a hopeless romantic, comparing the two will help you understand how important these days are for the opposite sex.

Guys on the other hand, simply don’t understand that if you’re dating a woman and forget to plan something, just anything, for Valentine’s Day, you probably won’t get a date with her on February 15th, which ironically is “Singles Awareness Day” or any day after.

Guys, if you’re playing the field swiping right and left on mobile dating apps, or flirting on Tinder and Instagram, if you don’t ask our your digital crush, you lose.

Men wait all year for the Super Bowl, this big day in television. Women wait for Valentine’s Day, with the hope that their special guy will either propose, offer to take his online dating profile down, or say “I love you” for the first time.

Women even secretly hope that the guy they are dating might want to change his Facebook status from ‘Single’ to ‘In a Relationship.’ It’s on the digital wish list for women, period.

Men are very prepared for the Super Bowl. They decide which venue to view the game at and with whom they would like to spend watching the teams battle it out.

Women like to be prepared for Valentine’s Day. They start giving little hints out a month in advance about their favorite romantic restaurant, post photos of jewelry or trinkets on instagram and facebook, all with the hope the the guy they’re dating will take the cue and book a reservation before their favorite eatery is fully booked.

However in contrast, when a man’s favorite team loses the Super Bowl, he will be disappointed, but will get over it. He’ll know there’s another chance next year and will spend the entire football season rooting for his team. If a woman’s favorite beau, or someone she is dating ,doesn’t ask her out for Valentine’s Day, she won’t get over it. Expect a breakup or a big confrontation.

Which team will you be rooting for this Super Bowl and do you love, or hate Valentine’s Day?

Julie Spira is America’s Top online dating expert and Digital Matchmaker. She’s the CEO of Cyber-Dating Expert and has been coaching singles for almost 25 years in finding love online. For more dating advice follow @JulieSpira on Twitter and Instagram.

Sign up for our Weekly Flirt for dating advice delivered to your inbox.