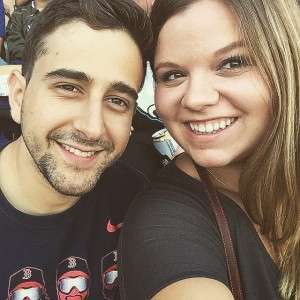 Meet Matt and Allee who met on Tinder. Read, in Matt’s words, about their cyber love story and how “Swiping Right” led to his dream girl.

MATT: I met my girlfriend on Tinder.

Now, I know what you’re probably thinking. ‘Wow, that relationship must be solid if you met on a site like Tinder.’ Frankly, I don’t blame you. Up until about six months ago, I would have responded the exact same way. But Allee and I are living proof that you can find love on Tinder.

Before signing up in January of this year, I had never used any online dating sites, so you can probably imagine my skepticism. I had moved to Los Angeles only three months prior, and to that point had been wildly unsuccessful with dating. I’ve always been a gregarious, outgoing guy, and as a professional journalist and former TV and radio reporter, I’ve never thought myself to be lacking in the charisma department, so conventional ways of meeting people seemed to me much more opportune and much less shallow than some mobile app that asks you to judge someone based on your first impression of a photo.

I quickly found myself addicted to swiping in directions both left and right, and even more so to seeing the words “It’s A Match!” flash across my screen. When I first saw Alexandra (Allee) on Tinder, I’ll admit, I swiped right because I thought she was sexy. I swiped right, but got no response in the days that followed. During that time, I went out with a couple of girls, also from Tinder, but none that made me think “Wow, she’s girlfriend material.” Maybe a week after I had first swiped right, I got a notification saying that Alexandra and I matched.

I’m not sure why, but a voice in my head said ‘Message her! Now, you idiot!” I took a quick glance at her profile, which began “Independent. Sales Secretary. Sass queen.” I led with this: 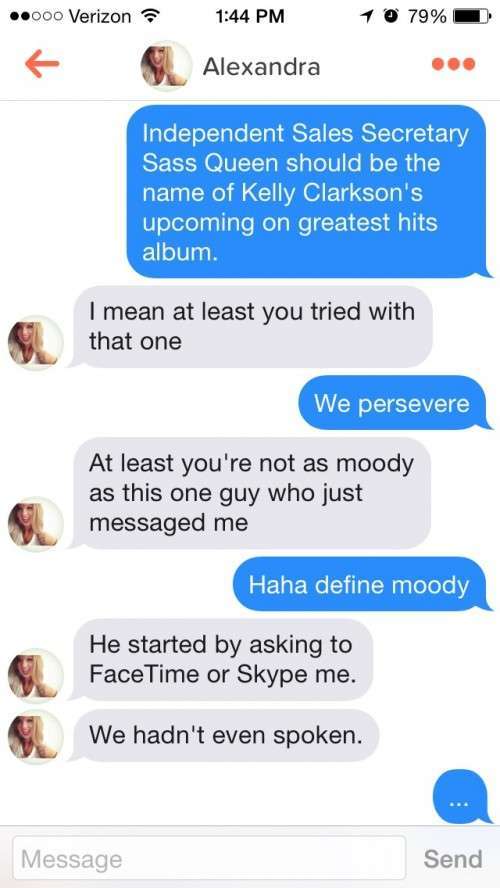 Over the days that followed, Allee and I messaged constantly via Tinder. We would message each other ‘Good morning!’ every day before work and “Goodnight!’ every night before bed. I explained to Allee that I was unsure what I was looking for, because my previous girlfriend had left me abruptly, after a three year relationship, so she could explore other options in men. Allee told me she had reservations as well, because she’d been taken advantage of many times in the past. Despite my skepticism, there was something inexplicably magnetic about her personality, and I knew I had to at least give it a shot.

We continued to text and eventually made plans for dinner and a movie the following weekend, just before Valentine’s Day. Doing my best to quell my nerves when I arrived at the front door, I knocked and was greeted by a stunning, curvy blonde with a bright smile, kind eyes, and an infectious laugh. We were able to skip most of the formalities and awkwardness, since despite it being our first meeting, I felt like I knew so much about her from texting back and forth in the days prior.

The plan was to hit my preferred sushi joint, but as my luck would have it, the restaurant was closed for a private party. After having a laugh at my expense, we found a suitable substitute and bonded over our love of raw fish and Bradley Cooper films, and I regressed to a high school kid with butterflies in his stomach when she laid her head on my shoulder during the movie. We shared our first kiss that night on her doorstep. We made plans to meet again the following weekend, and went out on an impromptu Valentine’s Day date for Italian food and The Spongebob Movie: Sponge Out of Water (which we obviously loved).

Allee and I have now been together for more than half a year. We see each other several times a week, and enjoy going to baseball games, eating sushi, and going on hikes around L.A. with Allee’s German Shepard, Hazel. Allee is a thoughtful, selfless, hilarious, and generous woman. She makes me want to be the best version of myself but wouldn’t change a thing about me if you asked her. I often ask myself (and sometimes her too) what I did to deserve this. We’re incredibly happy together, and while no one can predict the future, we are planning to be that way for the foreseeable future.

The moral of the story? You never know unless you swipe (right).

Congratulations to Matt and Allee on finding their match on Tinder.

Do you have an online dating story to share? Send us your story and we might feature YOU in our Cyber Love Story series.

Julie Spira is America’s Top Online Dating Expert and Digital Matchmaker. She was an early adopter of online dating and is the founder of CyberDatingExpert.com. Julie creates Irresistible Profiles for singles on the dating scene and helps them find love on Tinder with SwipingRight.com.  For more dating advice,  sign up for the free Weekly Flirt newsletter and follow @JulieSpira on Twitter.

1 thought on “Cyber Love Story, Matt and Allee – They Met on Tinder”